What is Project De-Vine/Golden Bay? 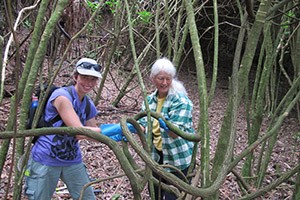 Project De-Vine is a non-profit group helping eradicate and/or control pest vines and other invasive plant and tree species in Golden Bay and northern Tasman District.

It evolved out of Rocklands Road Weedbusters that was set up under the auspices of the Golden Bay branch of Forest and Bird in September 2007. The weedbuster group started out of frustration with the endless Banana passion vine seeds being brought on to clear properties, by birds, rats and possums.

The only way to alleviate the situation was to find a way to encourage as many neighbours as possible to clean up their vines. This small beginning has led to a much larger project which is involving all of Golden Bay. 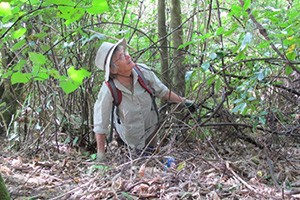 The specific aims of the Project are to:

The Project focuses on key noxious vines that are particularly threatening to our native flora in Golden Bay. The vines that are targeted are: banana passion vine, old man's beard and climbing asparagus. They have become a major threat to indigenous flora as they smother and / or strangle them. Ultimately this kills or severely stunts growth and/or regrowth of indigenous species.

The Project is primarily led and managed by volunteers, who started work on private rural properties. Through the successful raising of funds for weed control, the project has been able to establish a paid team of workers who carry out the pest vine control work. They work part-time as self employed contractors on private properties in the funded areas as well as doing contract work on Tasman District Council and QEII lands.

The management fees are used to co-fund other work where funding is not available. They are assisted by volunteers when working bees are carried out on some properties to encourage the local owners and promote the work. The Project works closely with the Tasman District Council, Department of Conservation and Project Janszoon, which is a trust set up to assist DOC to control pest plants and animals in Abel Tasman National Park (ATNP) and re-establish key native birds.

A synergy has been developed between these groups, leading to the better targeting of effort and more effective outcomes. By working in the areas adjacent to ATNP, the Project is playing a vital role in the buffer zone to control the spread of vines. So far the Project has moved progressively from the Pikikaruna range escarpment around Rocklands Road, through to a wider area from Birds Road to Rameka Creek.

A third area joins on to the other projects and extends from Birds Road to include all of the township of Pohara to Matenga Road at the start of Ligar Bay, where work is about to begin.

Seeding finance has recently been obtained to extend the Project to a fourth area, from Ligar Bay, via the rural properties behind Tata Beach to Wainui and up to the boundaries of ATNP. Other initiatives are underway - see below:

These are being started with local and national sponsors and aim to help localised groups of lifestyle block owners and others who have the same pest vine problems, but are not covered by the main funding.

With the sponsors, we can provide support to start a group and run working bees where a member of our weedteam attends and gives advice on pest plant control, plant identification, vine cutting & pasting training, plus giving out pottles of glyphosate gel to use that day and keep for their own properties.

The first one is underway and had its first working bee on April 12th in Patons Rock.

Bush blocks, shelter belts and gullies of many farms have on-going problems with pest vine infestation. This scheme is aiming to provide subsidised pest vine control work to farms through out Golden Bay with free initial assessments. We have some funding, but need more to make it work effectively. We are intending to apply for more funding shortly.

The project has received two awards:

All the information a person could ever need about NZ pest plants.

For more information or to lend a hand